Most crab-care books state that it is impossible to tell the sex between male and female land hermit crabs. Actually I have found that is not that difficult, provided your hermit crab is willing to come rather far out of its shell for you.

The female land hermit crab has tiny genital openings called gonopores. The gonopores are located on the first segment of the back pair of walking legs. They are close in to the body, near the joint of the cephalothorax and abdomen. 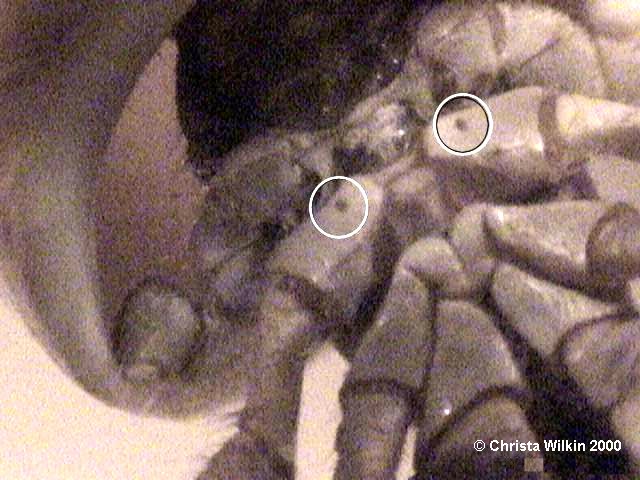 Since females of both species of land hermit crab sold in the United States (purple claw and Ecuadorian) have gonopores in the same place and of the same size, it is probably safe to say that all the females of the species kept in captivity (including Australian species) have their gonopores similarly situated.

Many crabs are reluctant to come far enough out of their shells to allow you to see whether or not they have gonopores -- DO NOT FORCE THEM!! To have a better chance of seeing them, try looking for them after or during your pets' weekly bath. I have found most of my crabs are willing to come out far enough, but not all of them. Do not under any circumstances attempt to pull a crab from its shell to see the gonopores. The crab will sooner allow itself to be torn apart than be forcibly removed from its protective shell house.

© Christa Wilkin 2002
The information on this page is the result of research and examination carried out by Christa Malik Wilkin.